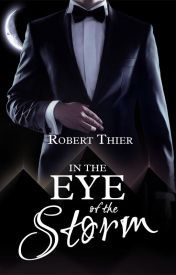 In the Eye of the Storm by Robert Thier

Many thanks to the author for the ARC in exchange for an honest review.

You know, I had my ups and down with this book. Initially I was really excited to receive the ARC from the author, since I found myself loving Storm & Silence for all the reasons I listed in my review. But with In the Eye of the Storm, it was a little different. I came at it full force, with lots and lots of expectations and also, ideas I of what I didn’t want, and yet…this…surprised me more than anything.

Like S&S, I finished this quicker than I expected.

What I love about Thier’s books so far is that they’re ALL fast paced. Every chapter has a climax (of sorts) that leaves you hanging for the next chapter. And when you pass the 50% mark, the rest is free fall. Meaning. Just hang on tight and go for the ride.

And like with S&S there’s everything from steamy kisses to being shot at to who knows what’ll happen next!

Oh yes, and did I mention the fake marriage? The Captain Lilly keeps running into? The poor Old Lady whose holiday was cut short because of Lilly’s lies? A conversation between Rick and Dick?? Oh and Mr Ambrose?

1) Mr Ambrose! He is my favourite character (but only because Karim didn’t get so much page time this time….) in this sequel. He was an ass a lot of the time to Lilly, but then Lilly was also being a bit of a stubborn donkey. Mr Ambrose was always relatively reasonable, and I think, despite the fact that we don’t know much about his history yet (a thing I am dying to know more of), he is still very well rounded as a character with evident likes and dislikes. Even better crafted all round than Lilly who is the main protagonist. I mean really…what kind of man would walk through a sandstorm just because it’ll waste time to camp? But it’s the fact that he’s a logical city man, that he makes his decision, which realistically, makes alot of sense. Even more so since Mr Ambrose gives orders, and takes his own advice……..including….

2) The always obedient Lilly Linton and her feminist mindset :D. I love it when she goes all out feminist, specially during the second half. Lilly’s not a girl to be left behind, nor is she is a damsel in distress! For the first half of the book though, I wanted to shake her – specially when she’s pretending to be Mr Ambrose’s wife (it was so nice to see her in a dress again!) – because she was acting so……STUBBORN. There were a lot of things she did which she could have done without well, making Mr Ambrose look like he did. But at the same time, she was just sticking to who she is!

3) Every conversation between Lilly Linton and Mr Ambrose. There wasn’t a moment where I wasn’t thinking not to laugh. Both of them have a really good dynamic with each other. As stubborn as a donkey, and yet logical and willing to compromise! Such as…a conversation about appropriate husbandly names for Rikkard Ambrose:

I thought about it for a moment, rolling the name around my tongue. Then, suddenly, an idea came to me, and a grin spread over my face. ‘I’m sure there are other abbreviations for your lovely name. How about “Dick”?’
He gave me a glare that sent shivers down my back. But my smile only widened. Inside, I was rolling on the floor with laughter, gasping for air. Ha! Payback time!
‘It’s “Rick”, Miss Linton! No discussion!’
‘Just as you say,… Dick.’
His glare cooled another dozen degrees. ‘I’m your employer, Miss Linton! You are obligated to follow my orders!’
In return for his ferocious glare, I gave him back a cheerful smile. ‘Apparently, you’re not my employer. You’re my husband now, Dick. Haven’t you heard?’
(Kindle Locations 2858-2864).

4) THE ACTION – while the beginning contains less action, this book is filled with it. From beginning to end. There is every single moment in it worth waiting for. But my favourite part, is the end ;).

5) The little old deaf lady! While in the end the joke got a tad bit old, she was a cracker. Poor woman, being tied into Lilly’s work by accident!! And strangely, I was waiting for the moment where she says ‘I’m sorry to hear that’ and actually has all of her hearing! But then, it didn’t happen, and yet, she was still a fun character :D.

6) The setting. To some degree, it’s pretty vivid. Thier has expected social customs down to a pat, so it makes it clearly to visualise without great detail in the description of the world. So in a way, this makes his plain but humorous style of writing really engaging and quick to read. The worldbuilding is built into the conversations, into the scenes of action, and through the characters interactions with each other!

7) This sequel actually reminds me of the kind of series where in each book the characters encounter a new problem that they have to solve while still remaining their somewhat ambiguous yet high in chemistry relationship!

8) THE ENDING IS NOT FAIR. I was expecting, expecting some kind of IDK and then it ended, with Lilly returning to work, and………..where is my Mr Ambrose and Lilly Linton moment?!?! Or SOMETHING. ANYTHING.

1) The plot felt a bit scattered and a bit weak, at the same time, it was simple, with one motivation in hand. HOWEVER, because there was only one motivation, the ending thus, seemed a bit abrupt, which left me mourning :(((( and wondering what might happen to Lilly and Mr Ambrose next!

2) VERY romance focussed for the first half. I actually really liked the development of Mr Ambrose and Lilly’s relationship in S&S but In the Eye of the Storm, their relationship takes another level while still remaining in the same position.

3) LILLY LINTON WHAT ARE YOU DOING HALF THE TIME?! Especially the first half. Even though I understand everything you do, I still have to con you! Because sometimes I wanted to shake you so badly. It wouldn’t kill you to behave for at least one or two of your acting scenes with Mr Ambrose, would it?! But then, actually, with the way you’re written, it also makes more sense, since later on, the scene where you’re obedient is actually a little bit more touching!

4) Lilly finds excuses wayyyyy too easily to escape from her home. It makes me wonder sometimes if it’s in the 1920s instead of earlier, considering how chaperoning was more serious and her aunt really doesn’t seem to care much at all ^^”. Then again, Lilly’s family isn’t excessively rich….but well! Logically, it does all work out, I kind of look forward to the moment when her lies/secrets are exposed!

(Yes, lovelies, I’m awfully aware that I am not writing an essay lol.)
A lovely sequel to S&S. I loved it for the action, for the fast paced, and also for most of the Mr Ambrose and Lilly moments. Goes well with a plain cup of tea i.e. a boring day. Robert Thier is also very humourous in his writing, so there’s not really a chapter where you’re wondering if you’re going to be bored (if you followed my statuses, and wondered what I was referring to around the 50% mark, I was mostly complaining about the romance part, since it was getting a tad tedious but then the WALL exploded and BULLETS were flying and MR AMBROSE was rescuing a DEAF OLD LADY and Lilly at the same time, even though moments before they were kissing like mad – er Lilly and Mr Ambrose, not Mr Ambrose and the Old Lady lol.) If Thier writes another book, I will definitely be reading it. Oh Yes, because the ending of this one is UNSATISFACTORY. GIVE ME MORE MR AMBROSE.

And on a final note there was a lovely surprise at the end of this book with additional chapters from Mr Ambrose’s POV which I LOVED. It was sooooo nice to read from his POV. I actually would love to see chapters from his pov. Mr Ambrose has such an interesting mind after :P.