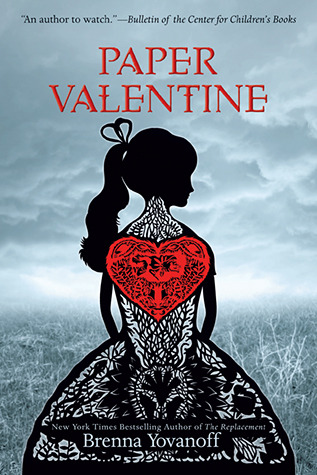 Paper Valentine by Brenna Yovanoff
My rating: 4 of 5 stars

Okay so I gave this 4 stars primarily because in comparison to the last book I read, this one was so much better. Once the story started flowing (thankfully within the first 50 pages), I really started getting engaged, and it didn’t take me long to finish this at all! (It does help that I had a to-and-back train ride to read.)

The city of Ludlow is gripped by the hottest July on record. The asphalt is melting, the birds are dying, petty crime is on the rise, and someone in Hannah Wagnor’s peaceful suburban community is killing girls.

For Hannah, the summer is a complicated one. Her best friend Lillian died six months ago, and Hannah just wants her life to go back to normal. But how can things be normal when Lillian’s ghost is haunting her bedroom, pushing her to investigate the mysterious string of murders? Hannah’s just trying to understand why her friend self-destructed, and where she fits now that Lillian isn’t there to save her a place among the social elite. And she must stop thinking about Finny Boone, the big, enigmatic delinquent whose main hobbies seem to include petty larceny and surprising acts of kindness.

With the entire city in a panic, Hannah soon finds herself drawn into a world of ghost girls and horrifying secrets. She realizes that only by confronting the Valentine Killer will she be able move on with her life—and it’s up to her to put together the pieces before he strikes again.

Paper Valentine is a hauntingly poetic tale of love and death by the New York Times bestselling author of The Replacement and The Space Between.

For a book like this, I think it was well done over all. If I compared to this another book, I’m not sure I would pick out any flaws, because there aren’t many–or maybe it’s better said that compared to the last book I read, I had a lot more to like in this book in comparison. The plot is pretty average, pretty straightforward. It takes a moment to get used to the idea of the ghost hanging around, but you know what? I think the ghost’s relationship with Hannah is the most outstanding part of this novel. The actual mystery plot was pretty predictable, but at the same time, not very. I didn’t exactly spot it until later on. Still, it was a nice twist. I was expecting it though!

Hannah Wagner is the main character and focal of the whole story. On the whole, she’s a quiet girl who always seemed to be overshadowed by her best friend, the now dead Lillian. For a moment, I thought this story would twist their relationship and burn it after ripping up all the history between the two, leaving me with a story about a girl who actually didn’t realise her best friend didn’t like her that much and was only haunting her because she was the only girl who was too chicken to do anything. BUT. Yovanoff didn’t do that. What she did though was paint the story of a girl who had taken her own life and another girl, the one left behind, and wove a beautiful story of friendship between them. The ups and the downs, the anger and the sadness. THe loneliness and the grief. Yovanoff exposes it, and spoon feeds you as the reader, guiding you on a coaster of paranormal mystery. I really love the things that Hannah realises about herself and also, about everyone else around her, and mostly, about Lillian. It was also interesting to compare the inner voice of Hannah and her actual physical appearance. She’s described as small, and wears a lot of bright coloured dresses (influenced by Lillian), something I often forgot, since her inner voice never seemed like someone who would wear a brightly coloured dress.

Oh Lillian who I can’t remember despite just finishing this, what her last name is. Lillian is the ghost of the story. She is literally a ghost, and she is currently haunting Hannah. Or rather, more specifically, she’s watching over her (something that isn’t entirely evident until later on). She is definitely a colourful character. Certainly, a much more outstanding social voice than Hannah, yet before this book starts, she suicided, and it absolutely devastated Hannah. Yet she’s still alive six months later, albeit as a ghost, and she’s haunting Hannah. If Hannah is the main character, then Lillian is the second. And I really loved how her character developed. I really loved how much the pair mean to each other. The declaration of their friendship is so much more than the small romance in this book–the romance is nothing in comparison! It’s cute yeah, but your eyes and mind will be on Hannah and Lillian.

Other characters, all had evidently important/key roles in the story. Although with one character, I did want to kind of see what happens after the ending scene of this book, but that’s just one small desire compared to whole of the book. One small tie which well, quite frankly, it was nice to see Hannah snapping at that girl! Finny was an interesting love interest. Though, their romance was a very small aspect of the book. Ariel–love her as Hannah’s sister! As for other primary characters, they were all interesting! Specially who turned out to be the murderer in the end.

The City of Ludlow.

And also predominantly Muncy Park where most of the killings take place. At times I forgot to worry about what era this was set in, because even though it’s set in contemporary I often forgot because Hannah was always wearing some brightly coloured vintage thing. Another thing about Hannah.

I suggest this as a suggestive read. I liked it. (Even if my opinion is a little biased based on what I just read yesterday–A History of Glitter and Blood.) It’s not bad for a paranormal mystery. Simple, quick, easy, and not at all disappointing (though maybe if I’d read this another time, after a series of spectacular books, this book’s good stuff might have been dimmed in comparison).