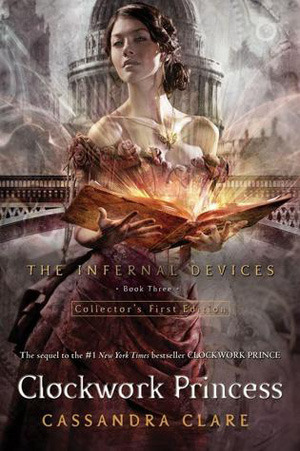 This has GOT to be one of the longest novels I’ve read in a long time. I’m surprised, I’ve been getting annoyed at Cassandra Clare’s many works…and Clary and Jace from her other series, but I always did say the Infernal Devices were better than the Mortal Instruments. Still, I was surprised by this one. I didn’t expect to like, nor did I expect it to drag on for so long at the end. But still, I liked it. I liked Will to begin with, because he is and always will be the dashing, smart mouth, brooding love interest. But I liked Jem too…to be honest I thought he would lose out to Will like Simon lost to Jace, but he didn’t. And I liked how it ended…but it really must suck to be Tessa.  You know, she knows she will lose Jem again, because she’ll live for a lot longer, but she still wants him. And it was so sad seeing her life flash forward, and seeing Will die, I can’t believe I’d feel anything for him, despite his dashing charm.

My one annoyance with this entire book was the last two or three chapters. Everything before that was bam, bam, bam. But then, the climax was reached, Mortmain was defeated, and I felt it should have ended there. Except. It didn’t. And then I spent another seventy pages reading about what happened which was great and all, but it felt so final. WHICH is ALSO great, but I can’t believe I’m actually complaining how final it sounded…since I was so annoyed that the Mortal Instruments became a series of six books instead of three. But I’m glad this ended like it did. You know, I wasn’t going to read the proposed trilogy that’s set after the Mortal Instruments, but after Clockwork Princess, I think I might!